ERIC and I made a day trip to Yosemite National Park this week to see the impressive Waterfalls.  The snow started to melt last week during the beginning of the summer heat hitting the Central Valley of California.  We had a spectacular time as we hiked through the Yosemite Valley and snap picture after picture of the many waterfalls that were gushing over the granite mountains surrounding it.

YOSEMITE has always been a favorite of ours, maybe because it is in our backyard.  Only 1 hour from our home.   Or it might be the amazing sites we see no matter what time of the year.   We make several trips a year to Yosemite National Park and it is always delightful.

THIS  trip was not a disappointment, even though we were hoping to see snow on the ground like we did last year.  There was no snow but seeing those magnificent WATERFALLS with the blast of the spray as it hit the rocks, was amazing.   I don’t remember ever seeing so much water in the Valley.   There were small waterfalls everywhere you looked, and the Yosemite Falls, Vernal Falls, and the Bridalveil Falls were spectacular.  The roaring sounds of them cascading over the mountains was a sight to behold.   Like I said, YOSEMITE never disappoints! 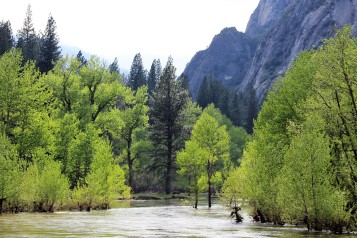 Falls mirrored in the meadow

Eric is shooting with a Canon and my pictures are with my iPhone.